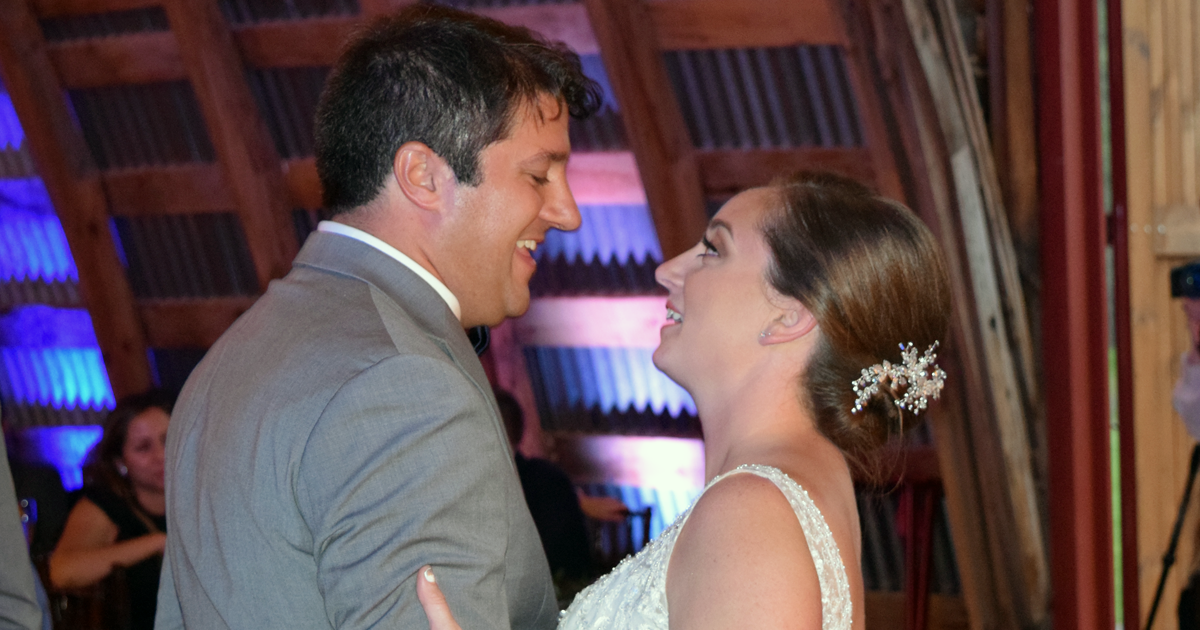 Peter is very professional during the entire planning process all the way through the event. He did an amazing job getting people on the dance floor and staying on the dance floor the entire night - overall, he was amazing to work with!
Karina and Eric, Hayloft on the Arch, Vernon Center
1 2 3 … 28 Next » 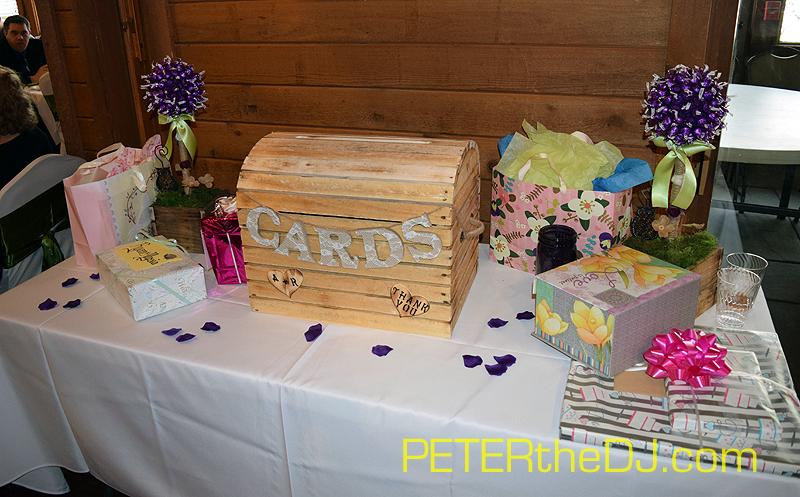 Various Central New York news outlets have published reports this week about a string of wedding reception thefts in the Utica area.  At least three local venues were hit by a pair of wedding crashers who walked right in, grabbed the newlywed couple's gift cards (and the cash inside those cards) and walked right out.   There may not be any recourse for the victims, but their experience serves as a lesson for those of you planning future weddings.  Find out how weddings can be an easy target --  and how some simple planning is all it takes to safeguard your own gifts.

Problem: It's Easy to Blend-In at Weddings

One of the most common questions on social media has been, "Didn't anyone think it was odd to see strangers at the reception?"

Think about it: the only people at a wedding reception who couple possibly know everyone on the guest list are usually the newlyweds themselves.  Even then, each newlywed may have invited guests the other newlywed has never met before.  With so many people attending and so many things going on, it's relatively easy for strangers to blend in.

Ever watch the 2005 movie "Wedding Crashers?" Just like the characters played by Owen Wilson and Vince Vaughn, the two suspects in Utica apparently knew to show up at the right places, at the right times, dressed appropriately for a wedding reception. You can see that in a security camera image from one of the venues, released by the Utica Police Department.

In my six years of DJ'ing weddings, I've never had one where guests were asked to show their invitations or otherwise "prove" their way into the venue.  Although I've never heard of problems with crashers at any of my weddings, the doors were open and anyone could walk right in.

Perhaps the only time a crasher might outed is dinnertime.  Most weddings assign seats, so a crasher would have to be crafty enough to grab a nameplate for someone who definitely won't be attending ... and then be prepared to convince the other guests at that table how they know the newlyweds.

But most thieves won't be quite that bold: staying for dinner is a huge risk.  It'll only give other guests more time to suspect something's fishy, and more time to remember their faces.  Thieves are more likely to sneak in, grab their loot and get out as quickly as possible.

And because most guests drop-off their gifts as soon as they arrive for cocktail hour -- a time when the newlyweds are often out doing post-ceremony photos -- thieves can probably be successful with a "grab and go" near the end of the cocktail hour.

Wouldn't guests see the thieves cleaning out the card box?

Yes, the thieves may have had witnesses in all three cases. But again, there usually isn't a single person who knows everyone else who should be there.  Any witnesses likely assumed the thieves were legit guests, "volunteering" to help "put the cards away" for the newlyweds.  Unfortunately, we sometimes trust people too much, rather than stepping up and questioning who they are and why they're taking the cards away.

So, how do you avoid becoming the next victim of wedding card thieves?  Here are some solutions -- most won't cost anything, but do require some planning. You don't need to use all of them, but hopefully at least one of these will be feasible.

Solution #1: Require invites at the door

Like I said before, I've never seen a wedding where people had to show their invites to get in.  Understandably, most couples don't want the "high security" vibe that comes with having someone guard the door.  Accordingly, guests aren't accustomed to bringing invites with them.  Imagine the uproar when Aunt Phyllis and Uncle Ralph get denied because they left their invite at their hotel, a 30-minute round-trip, not counting traffic.

Of course, you could clearly state on the invitation, "Invitation required for entry" or something to that effect, so that guests know what's going on. But chances are some will forget or ignore the advisory.

You'll automatically minimize your risk if you can minimize the number of gifts at the reception.  Inside your invitations, encourage guests (in a polite, tactful way) to send gifts directly to your home, rather than bringing them to the reception.  Not only is it safer, it's more convenient -- less stuff you need to carry out of the venue at the end of the night.

Of course if you are in a neighborhood where mail/package theft is a concern, or an apartment complex where things often wind up in the wrong mailboxes, this might not be the best idea.  But it might be as simple as having gifts sent to a nearby relative or friend, where deliveries are more reliable.

Despite your efforts, be prepared for gifts at the reception anyway -- no doubt some guests will either fail to read the directions, or simply choose to ignore them.

Solution #3: Recruit guests to "work security" for you

If you feel comfortable doing so, you could ask a few trustworthy people to keep watch over your gift table throughout the reception.  Make sure you get a few people (at least 3 or 4) so they can take turns and still have time to enjoy the reception.  They should know nobody is expected to be emptying the box, so if they see anyone trying... that's a red flag.

While someone is "on duty" they should avoid distractions, and they should stay in one place where they have a clear view of the gift table.  Someone who would be likely to make plenty of trips to the bar, the restroom or outside for smoke breaks, might not be a good candidate.

Solution #4: Ask your venue about security

What security measures does your venue have?  Some venues are equipped with real, working security cameras, while others might only have decoy cameras intended to scare-off thieves at a fraction of the cost.  Some thieves might be discouraged by cameras (or even fake cameras), but it's apparent by the above photo that the Utica-area thieves either didn't care, didn't notice, or suspected the cameras were bogus.

When choosing a venue -- or even after you've already booked -- it's reasonable to ask the venue what kinds of security measures are available.  If they say they have cameras, ask to see the monitors.  What's covered by the cameras?  How clear are the pictures? Ask if everything is recorded, and how long the recordings are kept.

You can also ask your venue if they have a locked room or a safe you can use.  If so, then have a trusted relative appointed to periodically empty your card box and store the cards in that locked room or safe until the end of the night.

That being said, a lack of cameras doesn't need to be a dealbreaker -- just be prepared to employ other tactics to secure your gifts if you know cameras won't be capturing the faces of everyone who enters the venue.  In other words, don't just blindly assume cameras will definitely save you if something happens.  Even with the best cameras, they're only going to be helpful after a theft occurs, and there's still no guarantee you'll get everything back.  You'll still want to take steps to prevent a theft from happening in the first place.

Many newlyweds (and venues and wedding planners) choose to put the gift table close to the entrance to the reception.  It's convenient for guests, so they can get those gifts out of their hands as soon as they walk in the door.  But near-the-door locations are also convenient for thieves, because they'd barely need to make an appearance to get what they want.  It minimizes the chances they'll be spotted by anyone... and it minimizes their walk to the exit.

Instead, put your gift table in a far corner of the room.  It might be inconvenient for guests to have to walk all the way past their tables and back again... but a long walk through the room can also discourage a thief who was expecting a quick and stealthy "grab-and-go."  The farther they have to walk, the higher their chances of getting caught.

If you've got a "wedding website" on WeddingWire, TheKnot or elsewhere, be sure to use the privacy settings. By default, these sites are visible to anyone, so it only takes some simple searching for thieves to find out who is getting married at a particular venue this weekend and what time it's all happening.

And Facebook has been around long enough now, it should go without saying: check those privacy settings when posting wedding day info on social media!

Have any other ideas?

Wedding: Karen and Vince at Traditions at the Links, East Syracuse, 10/30/21

What a lovely, friendly, professional, and fun wedding DJ! I would highly recommend him!  Thank you, Peter!
Christina and Philipp, Benn Conger Inn, Groton
1 2 3 … 28 Next »