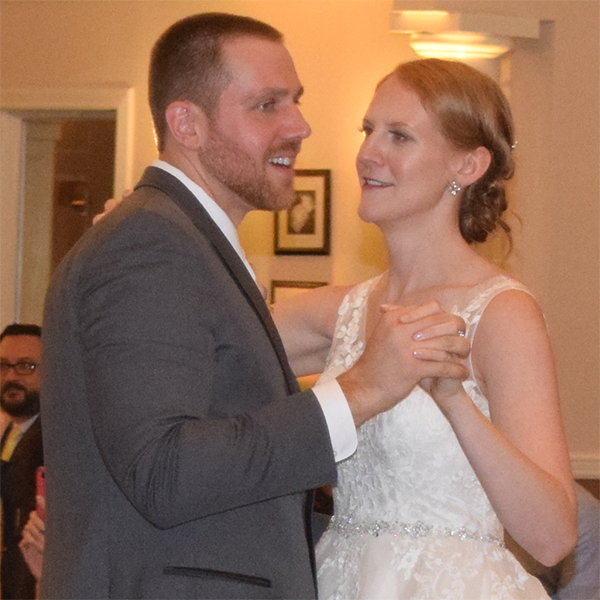 Peter DJed our wedding and we were thrilled with his work. He was so organized, prepared, and professional.
Sharon and Stephen, Traditions at the Links, East Syracuse
« Previous 1 2 3 4 5 6 … 26 Next »

Peter was great and did an excellent job making sure that our wedding day was a success! We were impressed with his level of professionalism and his willingness to work with us to make sure we were happy.

A little late on my review, but couldn’t not give it because Peter was so awesome to work with! From the get go he was super responsive and helpful and really informative. We were supposed to have an outdoor ceremony and couldn’t figure out how we were going to get a DJ set up up at the site because there was no electricity and we didn’t want to run a loud generator- we reached out to Peter about it and he went above and beyond to figure out how to solve the issue for us. He did a great job day of with music and the uplighting he did was beautiful! And beyond all of that he even put together a super thorough & detailed event timeline from pre-ceremony through end of the night announcements. It was awesome and so helpful!! We had such a fun time- thanks for all your help Peter!!

Peter was exactly what we were looking for in a DJ! He was incredibly professional, accommodating to our many crazy requests, and super organized. Everything flowed smoothly, he kept the crowd dancing and even snapped a few of our favorite photos of our guests dancing, long after the photographers had left for the evening! Thank you, Peter, for the long drive and everything you did to help coordinate our day!

DJ Peter was an amazing part of our special day!! During the planning months, he was helpful with suggestions, made our dreams come true for our reception entrances of the bridal party, responded within the same day via email or phone, communicated his past experiences to make sure our day ran extremely smooth!! Peter came to our reception fully prepared as he had all songs already in playing order and a running duration of the reception. Peter is an affordable, professional, and reliable DJ; I would recommend DJ Peter to friends and family.

Peter is one of the most organized people I have ever met. He responds very quickly to any question you may have throughout your entire experience. We had a timing snag for our reception entrance and Peter was able to adjust the timing for our wedding events with no direction. Everyone had fun and only had amazing things to say. He had a great music selection as well. Peter is a true professional DJ.

Peter was hands down the best wedding DJ we could have ever hoped for. He’s so professional and organized, it was like we had nothing at all to worry about! He is very responsive to both email and phone, and no matter what questions I had he responded promptly. The day of the wedding he was totally set up and on time for the cocktail hour, and since we had met to go over the schedule, there was nothing for us to worry about except enjoying ourselves and our friends and family. Even though we added a few unique events since it was Mother’s Day weekend, everything went off as planned, but it didn’t feel regimented. He judged the situation and the dance floor and interspersed the events seamlessly. He lets you give him songs you want to hear, songs you don’t want to heart and everything in between, and since my (now) husband was very concerned about the music it was so amazing. When the dance floor started lagging he just knew what song to play to get people moving again. One of my favorite things about him, which I think is somewhat unique for general wedding DJs is he brings his camera and gets STUPENDOUS shots of the crowd from his unobstructed view in the DJ booth. Some of my favorite photos I’ve saved from his blog about our wedding. It was the best day of both of our lives, and thanks to Peter we had an amazing time dancing and celebrating. I would highly recommend him to any couple looking for a DJ for their wedding, you won’t be disappointed. Also, one of our guests favorite things was when he passed out glow necklaces from the DJ booth, we had gotten them off of amazon for such a good deal, and it really added a lot of fun to the dancing. You can’t go wrong with Peter Naughton Productions, and if I had to do it again, I would not pick any other DJ.

Peter was very professional and organized throughout the whole process. Everything was planned out before hand and ran smoothly during the reception. Music sounded clear and Peter even posted pictures he took and a review of the reception on his website, a very nice added bonus.

Peter did an amazing job for our wedding, he went above and beyond our expectations and we were so pleased. Peter was amazing with communicating with us and organizing everything right from our first meeting! I would highly recommend him to anyone in need of a DJ.

Peter is an amazing DJ! He was great to work with throughout the entire process, from start to finish. He’s great at taking your concerns, choices, and vision to heart and working with you to make everything just as you want it. Our wedding couldn’t have been any better and Peter was just great! I would absolutely highly recommend him!

DJ Peter Naughton was excellent right from the start. He was easy to communicate with, speedy in his replies and when we had to change the wedding venue last minute due to an accident, he was very understanding and easy going about it. He played a great choice of music and everyone enjoyed the night dancing! I definitely recommend him as your wedding DJ.

Peter DJed our wedding and we were thrilled with his work. He was so organized, prepared, and professional.
Sharon and Stephen, Traditions at the Links, East Syracuse
« Previous 1 2 3 4 5 6 … 26 Next »